SIGMA has held many public observing sessions over the years, but Saturday 17th February 2007 was, without doubt, the most successful held so far.

The clouds which forced the cancellation of the Friday’s event rolled in again around dusk but we put our faith in the forecast and decided to open the gates. That proved to be a very good decision as the skies cleared to give us the clear, star-filled vistas we have come to enjoy at our observing site at Birnie, near Elgin.

Seven SIGMA members turned out with their telescopes with another seven or so to lend a hand and enjoy the sights. We were joined, at one point or another during the evening, by around two dozen members of the public whose obvious enjoyment of the views at our telescopes made the whole event very worth while.

Saturn, of course, was the main target of the night and, as it climbed higher and higher in the sky, we were able to see more and more detail. The satellites Titan and Rhea were obvious from early on and, as the night went on, Iapetus became visible not far from Titan. Around 10.45pm, the telescopes were turned to Saturn once again and, with increased magnification, Tethys and Dione popped into view, nestling in the distorted triangle formed by the planet’s disc and its rings.

The night had begun with Venus, shining like a beacon in the west. Searching out the variable star Mira was suggested and, (after a quick check on a star chart), we were able to identify it in the constellation Cetus. Mira is a red giant 420 light years from Earth. The entire star expands and contracts every 320 days or so, brightening from invisibility to 2nd magnitude and back again. At its peak right now, the star is big enough to swallow our entire solar system out to Mars.  Later on, we were treated to a fine display by the International Space Station. After about 30 seconds, it faded rapidly as it moved into the Earth’s shadow. A few sporadic meteors were spotted, two of them extremely bright.

Most of our visitors had a chance to view Saturn, the Orion Nebula and the Andromeda Galaxy, with its retinue of satellite galaxies. In the exceptionally clear conditions, the “oohs” and “aahs”, which always accompany a first viewing of these targets through a telescope, were louder than usual. The Seven Sisters, the Double Cluster and the Beehive Cluster also proved to be popular with our guests.

As the visitors began to drift away and the more hard-nosed faithful braved the lowering temperatures, we had a chance to have a look round at some of our own deep sky favourites. The Crab Nebula was picked out and several of us had a look at the galaxies M81 and M82, making a great sight in the same telescope field of view. The Owl Nebula and the galaxy M108 also made a fine spectacle. The Whirlpool Galaxy, M51 and its companion were scrutinised as were the globular cluster M53 in Coma.

Open clusters, M67 in Cancer, M41 just south of Sirius and the close pair, M46 and M47 just to the west, were examined. The tiny planetary nebula embedded in M46 was spotted, easy to see but it took some time convincing many others that it was there. The highlight of the night for some was the sight of three galaxies in Leo, all visible in the same field of view.

The planning and effort put into these public viewing sessions is quite considerable, but when we get a response from the public and reactions when they look through a telescope for the first time, like we did that night, then the whole exercise is very worth while. More and more SIGMA members are enjoying our observing sessions at Birnie and many astronomy clubs in the UK would sell off their Chairmen to get the viewing conditions we enjoy on a weekly basis.

That night, the club took possession of another 10″ reflecting telescope, donated by a former member who has updated to a computerised model. This should be a great asset, once it is assembled and aligned.  We have no shortage of telescopes available now and hope that full use of them will be made by members at future gatherings at Birnie.

The next important item in the astronomical calendar can be seen from our dark site on Friday 23rd February from 10pm, when the Moon will pass in front of the stars making up the Seven Sisters. If you have never seen a first quarter Moon through a telescope, get along in good time to enjoy the view before the main event starts.

Our next public event will take place on Saturday 3rd March, the night after the next club meeting, when we hope to watch a total lunar eclipse, as the Moon slides through the Earth’s shadow. 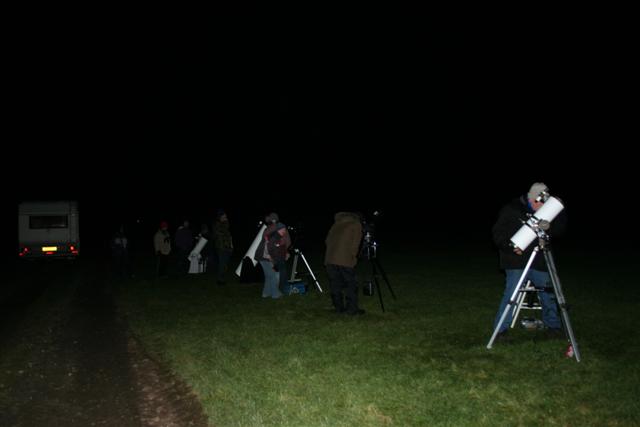