Just for once, we had two nights of clear skies for our weekend of public observing on 17th and 18th February, and we had a ball!!!

On the Friday night, we had beautiful clear skies but not the best “seeing” due to a fairly unstable atmosphere.

The biggest ever turn out of SIGMA members on one night saw 14 of us joined by about 30 members of the public, Mums, Dads, kids and couples. Some club members were making their first visit to our dark site, the first of many hopefully.

Everyone making their first visit was stunned by the brightness of the stars and the sheer number which could be seen compared to places surrounded by street lights.

We had six telescopes available, supplied and manned by Christopher, Tam, Roddy, Ian, Alan and myself.

The first request from our visitors was to see Saturn and nobody was disappointed. The quivering atmosphere meant that the Cassini Division in the rings and the faintest moons were visible only for fleeting moments when the seeing steadied.Next on the list was the Andromeda Galaxy, M31 and its retinue of satellite galaxies, M32 and M110.Orion stood huge and high in the south and amazed those who managed to see the stellar nursery of the Orion Nebula, M42, for the first time. Four stars in the Trapezium were easy to see.

SIGMA’s green laser pointer was heavily used throughout the night and proved invaluable in helping people to see just where the telescopes were pointing and where the different constellations lay.Once the “big three” were bagged, we had a look at Mars, now quite small as it speeds away from the Earth, the Double Cluster in Perseus and a fair number of Messier objects.

Open star clusters were the most popular targets with the string of clusters M38, M36, M37 and M35, tumbling down from Auriga to Gemini drawing gasps of admiration. The Beehive Cluster, M44, with Saturn close by, was another object enjoyed by many as was its smaller near neighbour, M67.Some people were able to see M81 and M82, the pair of galaxies in Ursa Major. Towards the end of the session we had a look at some of the more southerly clusters such as M41, M46 and M47. Two of the smallest and faintest objects, the supernova remnant, M1 and the Little Dumbbell Nebula, M76 were picked off before the frost and dewed up eyepieces won the night.

The most important sighting of the night was made by Karen, when she managed to find Tam’s keys after a search lasting around 15 minutes.

The Saturday night was much quieter, probably as it had been a pretty rotten day. The skies were as clear as the Friday night but the seeing was very much better. This was obvious from the first glance at Saturn. The Cassini Division was immediately obvious and four moons, plus a fifth in moments of really good seeing, could be easily seen.

Only three SIGMA members turned up, Ian, Alan and myself and we were joined by just three very lucky visitors who had a telescope and commentator all to themselves.

The Orion Nebula was stunning with the dark band between M42 and M43 more obvious than I have ever seen it.With fewer people crowding round the telescopes, we had a chance to look at some objects which had been overlooked on Friday. M51 showed up well with the two separate nuclei of the interacting galaxies quite obvious. The Owl Nebula, M97 and its nearby edge-on galaxy, M108 made a fine pairing in the same field of view.

We finished with a trip round some of the previous night’s open clusters, a look at the reflection nebula, M78 in Orion and a check on the illusive galaxy M33 through binoculars before iced up telescopes and misted up eyepieces were packed away ready for the next night at the bothy.

Will you be there? 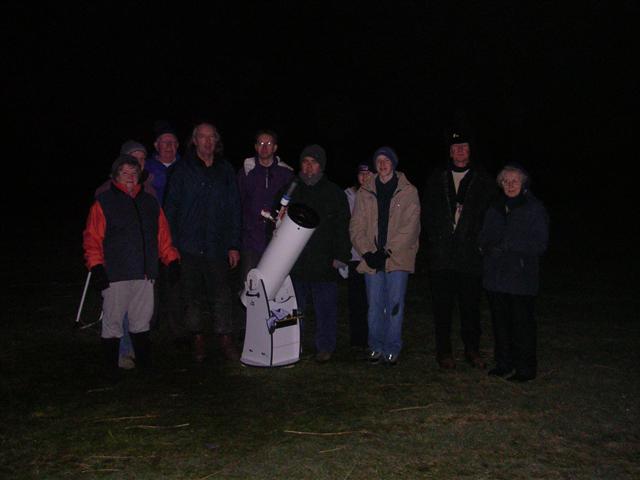